Hello this is the very second edition of Project Pinion Progress coming to you LIVE from the Athios team.
Today we will be talking about enemies and share an update on dungeon generation.

But before we start. Would like to apologize for the delay in putting out this PPP. We’ve all been hard at work developing concepts or code to make this the best we can make it. We’ll be trying to show more of what we’ve come up with sooner, especially as summer approaches.

Now then. What kind of enemies will you encounter up in the tower?

Many different types. Some will be similar to vanilla mobs. They won’t do anything special. As much as we’d like for every mob to have a unique design and ability, that’s just not feasible with our current team and time. However, we plan on a not insignificant portion having cool abilities. For many mobs, we start with the vanilla version, then see what we can do to expand on that.

Additionally, every set of floors will have a theme, allowing for each set to have unique mobs for more interesting gameplay, and more creativity in designing mobs. One floor will be themed after Fenix’s grand gardens, featuring enemies who flourish and thrive in this dangerous green area.


These are just some of the mobs unique to the garden theme. We hope to have plenty more for each, giving them each theme their own flavor of both gameplay and aesthetics. 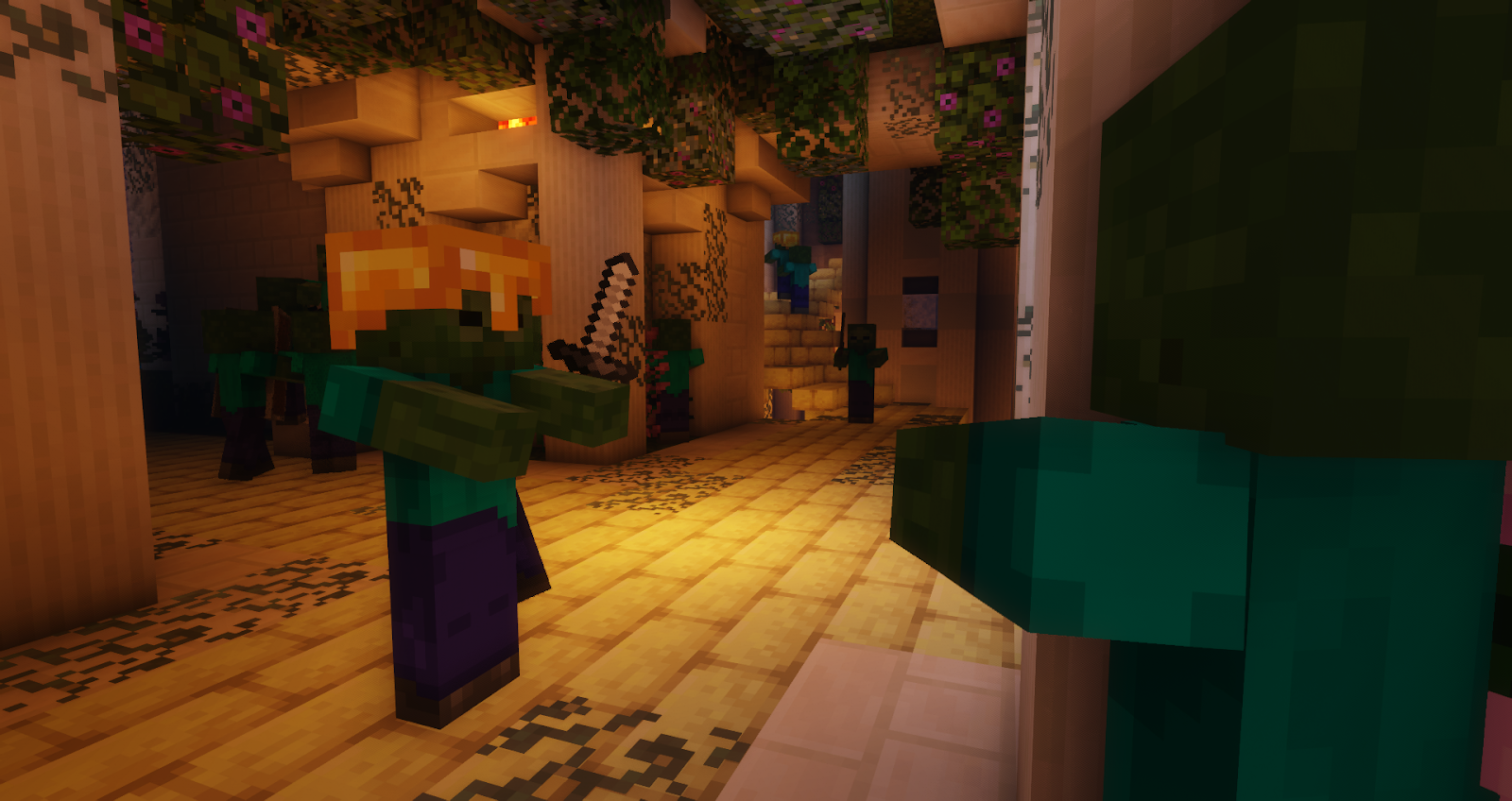 Here’s one mob you’ll be seeing on multiple floors, the Zombie Captain. He will make nearby undead mobs stronger, making him a powerful foe. This is also a little preview of the dungeon. More on the dungeon below.

Okay. What about how we spawn the mobs? Are they just going to be haphazardly placed across the dungeon? Absolutely not. But what did we need? And what didn’t we? We set to work figuring that out.

But how to most effectively and efficiently make curated encounters..?

New concept: Mob pre-sets
Using a system cooked up by Martoph, we can create multiple different sets of mobs.

For example, the Bee_Pack preset could include a mix of Bees and Iron Bees. Bee_Swarm could have maybe a dozen Bees and nothing else. Bee_Hive could have some Bees, some Iron Bees, and a Queen Bee. Wow!
Without a system like this, we’d have to place 12 different mob spawns in 3 identical copies of the same room. Instead, we place one (or maybe more for fun) mob spawn in a room and tell it which mob presets it can spawn. Much simpler and way more efficient. Additionally, we can even reuse the same presets for a different room!

The preset doesn’t have to be identical every time, either. The exact number and identity of the mobs that will spawn may change based on a level of chance or… the floor’s difficulty.

That’s right. As you ascend the tower, rooms will tend to spawn more difficult encounters. But how do we determine difficulty?

There are a few ways of doing this in games.

One common way would be scaling mob stats as players ascend. While this could be considered more basic, it would be a solid way of encouraging players to seek out better gear or think of better tactics as they ascend the tower.
Another way would be making mobs have better or more aggressive AI. This is out of bounds for us. Also, many mobs are very simple. They hold the W key at you and attempt to make contact. Another strike against it.

A third way would be to “upgrade” mobs in a pool or increase their quantity.
A more difficult Bee_Pack could change some regular Bees to Iron Bees, while a harder Bee_Hive could add an extra Queen Bee. This would be some extra effort, however.

We’ll be exploring these options and more.

One last thing we want to mention for now. There will of course be a boss at the end of a set of floors. While we don’t want to say too much about it just yet, here’s a statement.

We do not want our bosses to be a generic enemy with a massive health bar that slowly walks up to you and gets beat up for a minute or three or ten. That’s boring!

Expect some level of mechanics or fun attacks to dodge. I’m not saying that this is going to be the Dark Souls of Minecraft. But I have recently played Dark Souls and thought it was fun. Thanks Dave_X for the recommendation!

As for dungeon generation, it’s come some way since you last saw anything of it. Our builders have been hard at work, and actual dungeon mobs can spawn inside now. 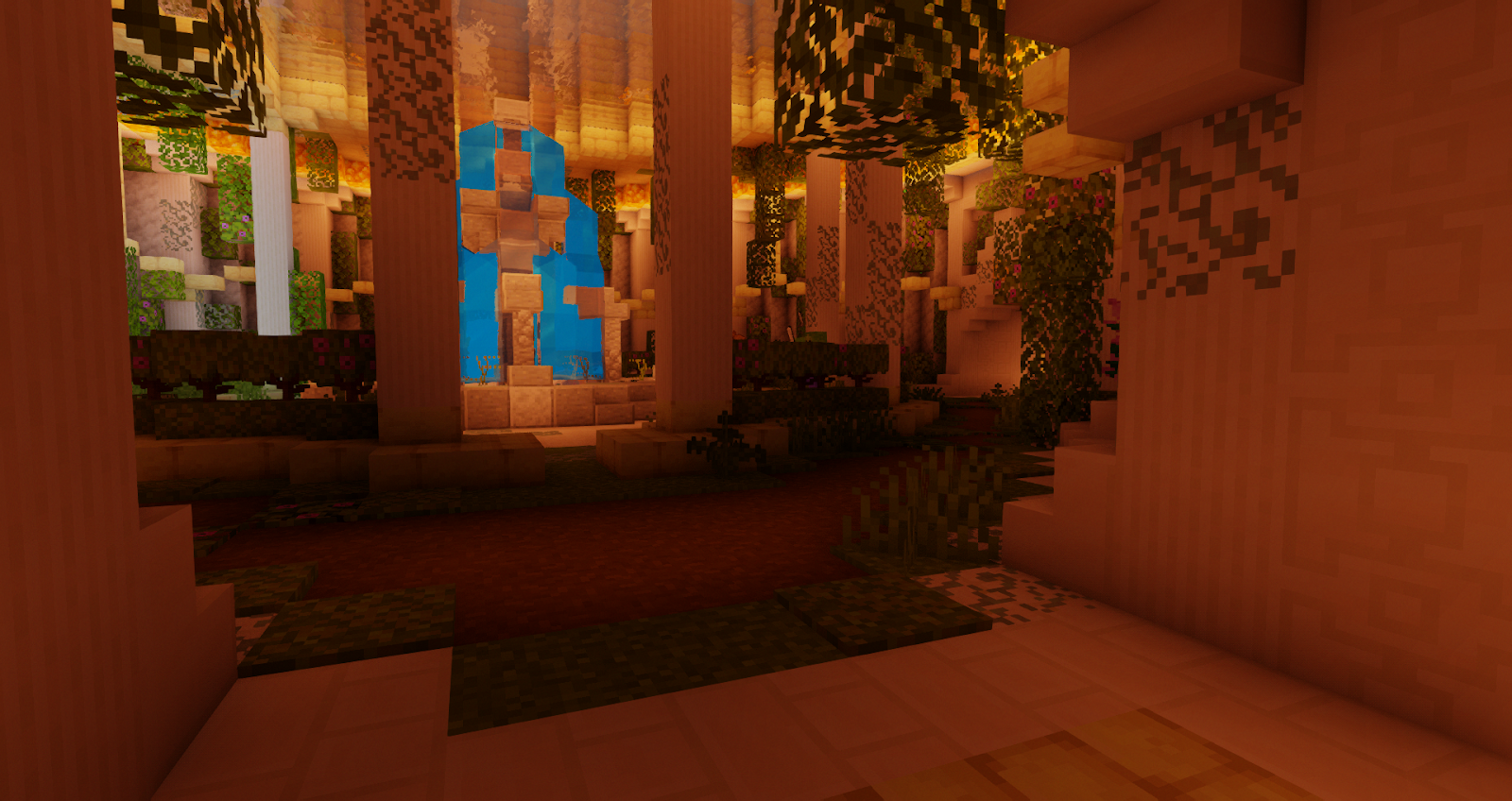 That’s it for this edition of Project Pinion Progress (PPP). Next time it is likely you will experience some insight into loot.

Anyway that’s all for now see you next time on play.athiosmc.com