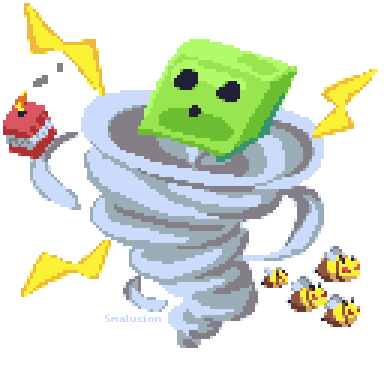 The horizon looks dark. You fear what it may bring.
The time to evacuate has long passed.
You can only hope to survive, as Disasters comes this spring.
Start running. Fast.

Take cover from the deadly Acid Rain as it melts both buildings and flesh!

Leap over great Chasms, or fall down into the earth!

Stay evasive as the Cubes of Death delete from existence whatever they capture!

Start falling up, then down, then up again as Gravity Shifts!

Hide from those not from the overworld during a corruptive Nether Invasion!

Don’t move too much, or too little, as you feel an explosive Instability within!

All these disasters and more are sure to get you in a panic!

To help you survive, pick between 6 kits and scavenge the map for 11 different power-ups.

Survive the 3 random disasters for as long as possible. Win by surviving for 3 full minutes, or as the last player standing. Credits are granted for time survived.

Players are given access to several kits to give a starting advantage:

Each kit starts with a set power-up, giving players a little control over how they want to survive.

Power-ups spawn across the map over time in set locations determined by a map's builders. They grant a unique, usually helpful effect, focusing on health or movement.

Disasters range from the lethal, to the destructive, to the inconvenient. The inability to jump may not hinder much, but if the map has been ravaged by meteors, falling into a shallow hole would mean a quick death.

There are currently 31 Disasters! For details as to what each disaster does…
Now announcing: The Athios Wiki! Coming eventually.

Or, check them out in-game! (Soon)

You may be wondering… Why add a new gamemode? Search and Destroy can struggle to get players, why potentially split the playerbase?

Not to worry, for there is reason behind this decision.

That’s about it for Disasters. See you there! I’ll be the guy who dies from jumping off a four block ledge after surviving a tornado.

Yeah, we have to write stuff here too. We’re not ditching this!

This is more a bug fix than a balance, but it’s worth noting!


On a final note, there is now a cool on-death effect. This applies to Disasters as well!


We’ve all been working hard on this update, so we’re very excited for everyone to see it!
See you there!